After a successful close above 0.5800, the Australian dollar continued its recovery against the US dollar. AUD / USD has crossed the key resistance zone of 0.6000 to enter a positive zone 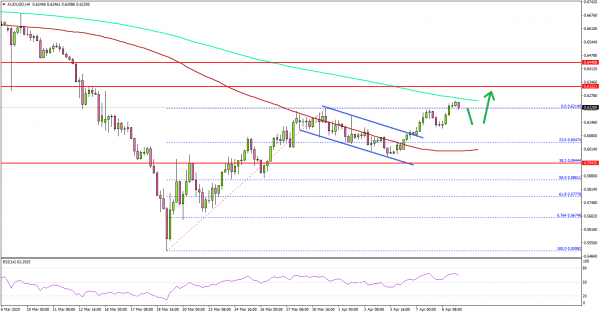 Looking at the 4-hour chart, the pair even settled above the level of 0.6080 and the simple moving average of 100 (red, 4 hours). Recently, there has been a downward correction from the high of 0.6214.

The pair traded below the 0.6120 support, but the 0.6000 support acted as a solid buy zone. As a result, there was a further increase and the pair passed a falling channel with a resistance close to 0.6080.

If there is a clear break above 200 SMA, the pair could even exceed the resistance of 0.6300. The next major stop for bulls could be the 0.6440 resistance zone.

Looking at EUR / USD, the pair is still above 1.0750 support and may correct higher. Likewise, the GBP / USD could exceed the resistance zone of 1.2500.

Euro dollar outlook:Visit the DailyFX Educational Center to find out why current events are the key to fundamental Forex...

The latest Industrial CAD market research report, offering robust insights about the potential size and dynamics of the industry...