With much of the world stuck, a country where life has started to return to normal will shine a light on the balance of the virus epidemic on its economy as China reports estimates of GDP growth. The data could either spread misery or provide a glimmer of hope to countries still severely affected by the coronavirus. The US indicators will also be examined as the March figures for retail sales and industrial production are released. But aside from these highlights, market sentiment will continue to be fueled by virus headlines, with investors hoping to see signs that spread is slowing at least in large economies such as the United States.

The Chinese economy contracted in the first quarter, but by how much?

Having been the first country to suffer from a COVID-19 epidemic, which peaked in China in mid-February, there is no doubt that the shock to gross domestic product (GDP) in the first three months of the year was massive. The economy likely contracted for the first time since the 1970s, ending decades of uninterrupted growth. The question is how severe the damage caused by shutting down some of the world’s largest factories for weeks has been, and to what extent the companies resumed operations at the end of March.

All of this should be revealed on Friday when China releases its first quarter GDP growth estimate, as well as industrial production and retail sales figures for March. A disastrous set of numbers could spark panic due to the fear of an even greater economic recession in Europe and America. GDP is forecast to have fallen 10% in the quarter and 6% per year. If the contraction turns out to be milder than expected, however, this will not necessarily be accompanied by a positive response in the markets as many traders would question the validity of the official data. 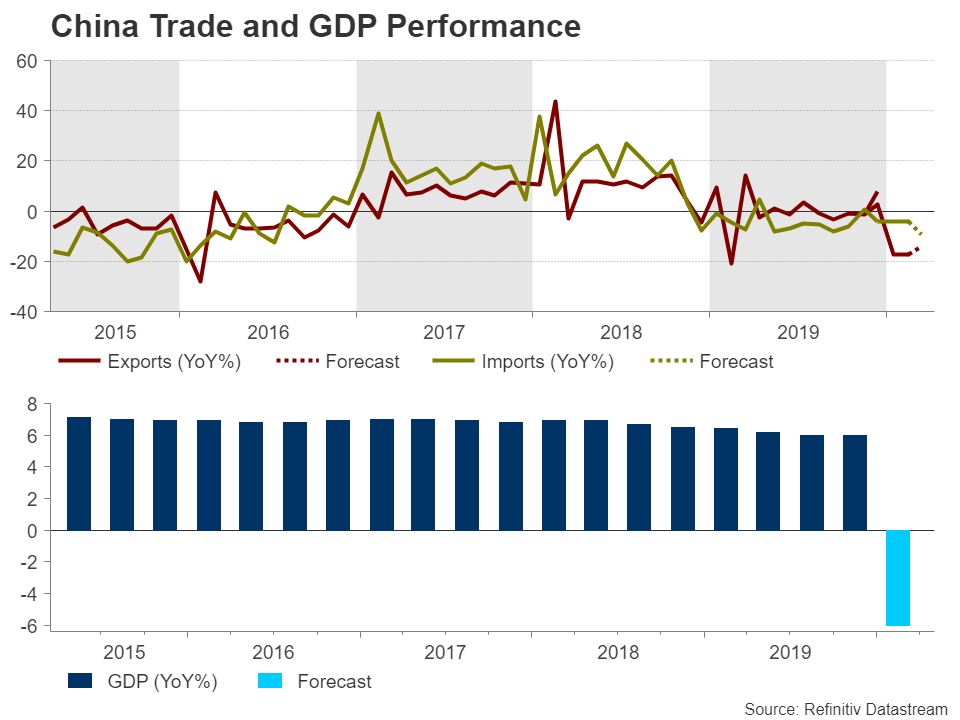 Another reason why the not-so-cataclysmic numbers can be wiped out is the fact that any recovery in China will likely be limited by economic activity falling from a cliff among its major trading partners just as the domestic situation improves. The risk of a desynchronized recovery should be underlined by the March trade data expected on Tuesday, as exports should have plunged 14% year-on-year.

Aussie rebound could be in trouble

The Australian dollar was on a roll last week, but disappointing numbers from China could be the perfect excuse for the bulls to stop and take advantage. Traders will also keep an eye on national data, which will include measuring NAB trading conditions on Tuesday, the Westpac consumer sentiment survey on Wednesday and the March employment report on Thursday.

The unemployment rate in Australia is expected to drop from 5.1% to 5.5% in March. An even larger increase would not bode well for the Australian’s impressive rebound, which surpassed the Fibonacci retracement of 61.8% from the fall in March, and would boost the expectations of the Reserve Bank of Australia accelerating its bond purchases in the coming weeks. 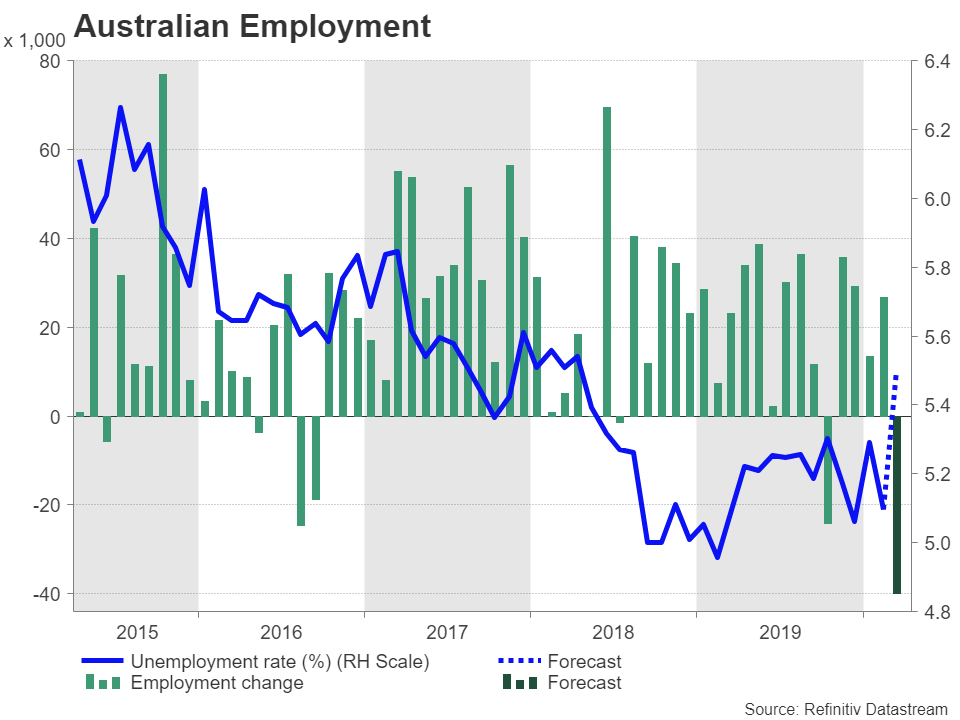 Overall, however, the nearly 15% surge in the Aussie from the 17-year low in March does not seem exaggerated considering that Australia was not hit as hard as the most other western countries by the pandemic and also has everything to gain from China’s progressive. the lifting of restrictions, which should help increase Chinese imports of Australian goods.

US data to plunge in March

It will be a pretty busy week for US releases over the next seven days, but unfortunately the economic landscape can only get uglier from the incoming data. Manufacturing investigations are expected to be carried out by New York and Philly authorities Wednesday and Thursday, respectively, with the two readings expected to drop in April. Housing data (building permits and housing starts) will also be finalized on Thursday, along with the latest initial unemployment claims. But the main focus will likely fall on Wednesday’s retail sales and industrial production.

American buyers had become cautious in February, even before the disease took hold in the United States. Retail sales fell 0.5% for the month and the drop is expected to have accelerated to 7% in March. This may not seem incredibly dramatic given that most consumers have been asked to stay at home, as the panic buying frenzy in supermarkets will likely mask the darker reality in other sectors of the industry. retail. 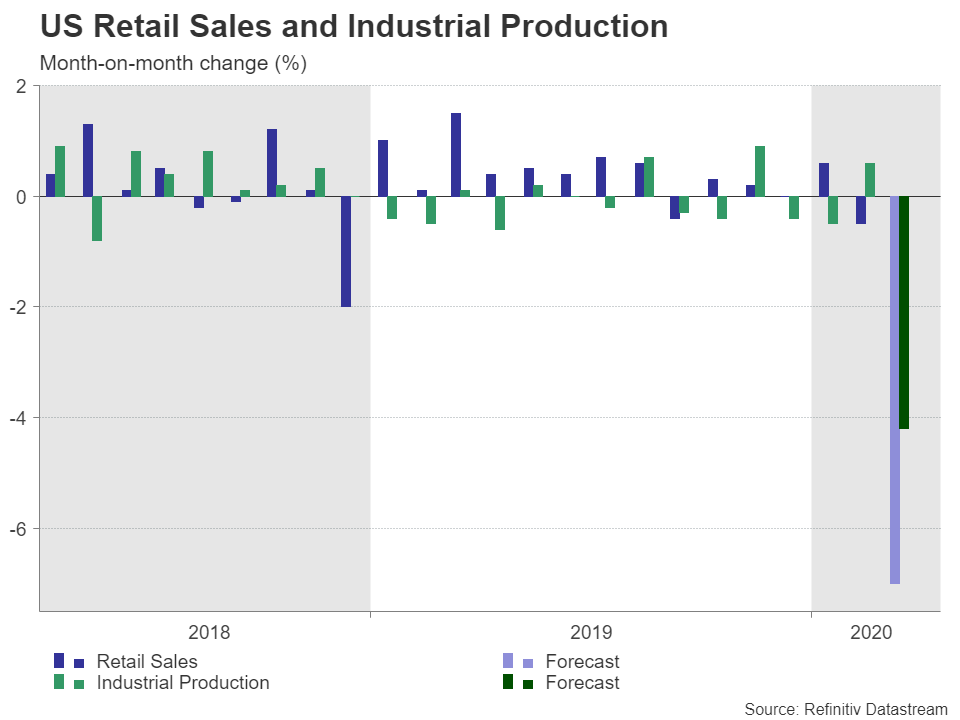 Likewise, industrial production also fell sharply, with forecasts of a monthly decline of 4.2%.

But despite the horrific numbers predicted, the US dollar could remain buoyant if the sense of risk worsens. In fact, growing optimism is currently the greenback’s biggest threat. There are indications that the virus infection curve is flattening in Europe and the abundance of liquidity from central banks around the world led to stocks recovering this week. The Federal Reserve just shot another ball on Thursday, announcing that it will inject an additional $ 2.3 trillion into the economy.

If the tone of the market continues to improve, the decline in the dollar will likely deepen.

Elsewhere, it will be relatively calm, the euro and the pound being inclined to be inspired by the feeling of the dollar. A Bank of Canada policy meeting should also not generate much reaction for the Canadian dollar. The BoC not only cut rates three times in March, cutting its overnight rate by 150 basis points in total, but also launched its first quantitative easing (QE) program, so policy makers have now exhausted their main options. However, the Canadian dollar not having been strongly stimulated by the latest jump in oil prices, leaving it exposed to viruses and national news, any indication by the BoC of new unconventional measures to come could weigh on the loonie.

The spring meetings of the International Monetary Fund (IMF) and the World Bank at the end of the week are also worth watching next week, as they will be under pressure to develop a plan to help the heavily indebted countries overcome virus crisis. Any pledge of additional funds by international lending agencies would not only ease the burden of the pandemic for the poorest countries, but would also support the strengthening of the climate of positive risk.

The local market has been volatile but mostly flat. He struggled to keep up with the US rebound on...

The research report focuses on target customer groups to help players to effectively market their products and achieve strong...

7 best digital ad stocks to buy for a rebound - Investorplace.com