Chinese consumers expected to be the mainstay of luxury market by 2025, report says – ECN 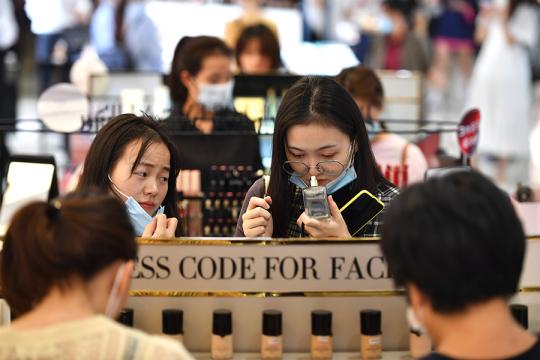 China will become the world’s largest luxury goods market by 2025, with Chinese consumers expected to account for nearly half of global spending in the sector during the same period, according to a new report.

In addition, mainland China will be the only region in the world to see growth in sales of luxury goods this year, the report released on Wednesday by consultancy Bain & Co.

Chinese consumers continued to purchase high-end luxury bags, clothing, jewelry and wine in China due to international travel restrictions. Total sales of luxury goods are expected to increase 45 percent on an annual basis to reach 44 billion euros ($ 52 billion) this year.

Globally, sales of luxury goods are expected to fall 23% to 217 billion euros ($ 258 billion) this year, registering the biggest decline and the first since 2009 as the pandemic dampened spending.

The global luxury goods market is expected to rebound to 2019 levels by the end of 2022 or early 2023, driven by strong sales growth in China and through online shopping channels, Bain said.

In China, the luxury market is expected to rebound at full speed, the contagion being more and more under control and companies having resumed their regular activities. Asia is still in recovery mode, while the Americas are expected to remain sluggish. Europe is grappling with new restrictions due to the resurgence of the pandemic, where confirmed cases are on the rise, Bain said.

Prior to the pandemic, international travelers, especially Chinese tourists, had largely supplied luxury markets in Europe and the United States, Bain said.

“In China, the number of people buying luxury goods is probably higher than ever, because not traveling abroad prevents them from buying abroad. There is no fatigue of spending on luxury in the Chinese market, ”said Daniel Zipser, a Shenzhen-based senior partner at consultancy McKinsey & Co.

The pandemic has further changed shopping for luxury goods online. So far this year, luxury purchases made online accounted for 23% of the total, almost double the 12% recorded last year. Bain expects online shopping to be the mainstay of luxury spending around the world by 2025.

“Besides shopping in stores, consumers hope that luxury brands can also embrace digital channels for easier access, as their time is very fragmented. For example, they would like to see recommendations on the Little Red Book (Xiaohongshu) social trading platform and video clips on the Douyin video sharing platform, instead of offline advertising posters, ”Jocelyn Dong said. , fashion and luxury analyst at the research firm Mintel.

We often see insiders buying stocks in companies that perform well over the long term. On the other hand,...

Capsule Hotels Market The research report covers the current scenario and the growth prospects of Capsule Hotelsd Market for...

We take a look at the market moves and the best runners supported for each race at Warrnambool on...

FTAs with US and EU will be more beneficial for India than RCEP - Moneycontrol.com