Despite the recent bearish movements in EUR / USD, the general trend is still up, as seen in the daily chart.

For three consecutive trading sessions, the EUR / USD pair is moving in a downward correction range. Investors are gearing up for the holidays by selling the pair’s recent gains, which hit their highest levels since April 2018 when it tested the resistance of 1.2272 during trading last week. The start of profit taking pushed the currency pair towards 1.2130 support before settling around 1.2170 at the time of this writing and ahead of important economic data coming out this week. With the start of trading next year, financial markets will await the reaction to US and European economic stimulus plans to counter the effects of the COVID-19 pandemic. Despite this, recent restrictions to contain new strains of the pandemic, coinciding with the launch of the vaccines, have negatively affected sentiment among investors and even individuals. The results of the survey by market research group GFK showed that German consumer confidence is expected to decline in January due to the strict lockdown measures introduced to deal with the second wave of COVID-19 infections. As a result, the prospective consumer confidence index fell to -7.3 in January from -6.8 in December. The result should drop to -8.8.

Commenting on the results, Rolf Borkel, consumer expert at GfK, said: “At the moment, the savings index is mainly responsible for the third consecutive drop in the consumer climate. With severe closures and most stores closed, the consumer climate has to face another setback. “

The Commerce Department also said the unexpected upward revision mainly reflects larger increases in consumer spending and non-residential fixed investment. The sharp increase in GDP in the third quarter follows a record contraction in the second quarter, when GDP fell by -31.4%.

Commenting on the US growth figures, Gregory Daco, Chief US Economist at Oxford Economics, said: “The main contributors to the gains were manufacturing, healthcare, accommodation, food services, retail and wholesale. ” However, he added: “The recovery is still far from complete, with production remaining below pre-COVID-19 levels in many industry groups.”

On the inflation front, the report says basic consumer prices, which exclude food and energy prices, rose 1.4% year-on-year in the third quarter, reflecting an acceleration compared to the 1.0% increase in the second quarter. The annual rate of growth of basic consumer prices is still well below the Fed’s target of 2.0%, which the US central bank has said it wants to exceed moderately for a while before considering raising interest rates.

“As we look to 2021, expectations will be one of the contradictions,” the Oxford Economics analyst added. “The overall economy will start very cautiously and will be vulnerable to hiccups during the microvaccine rollout phase. But with the emergence of a combination of increased government transfers and large-scale immunizations, we should expect gradual and steady activity leading to a small summer boom. We forecast real GDP growth of around 4.5% on average in 2021 after contracting 3.4% in 2020. “

Despite the recent bearish movements in EUR / USD, the general trend is still up, as seen in the daily chart. There will be no real reversal of the current general downtrend without breaking the psychological support level down to 1.2000. On the other hand, the stability above the resistance of 1.2200 is still a catalyst for the bulls to dominate the performance. As the annual vacation approaches, I think selling across the board is the best way to manage the currency pair.

The focus will be on a torrent of US economic data, the most important of which is the reading of the personal consumption expenditure price index – the Fed’s preferred measure of US inflation – as well as income and average spending of US citizens, durable goods. orders, jobless claims and sales of new homes. 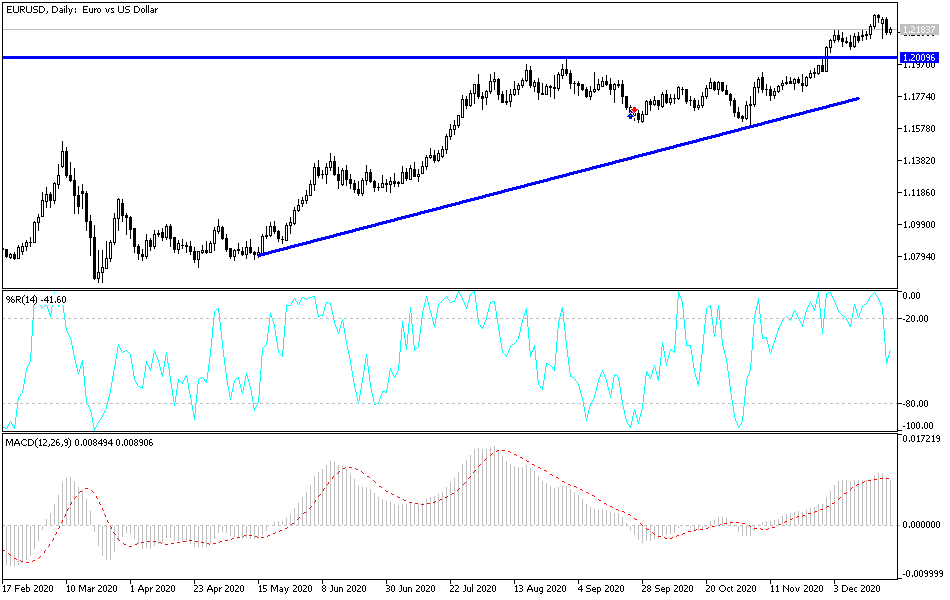