The dollar extended its widespread decline during the review week, down 0.71% to 89.68 – hitting a new 32-month low with the market low-volume with a slight dose of sentiment risk .

The optimistic sentiment was propelled as follows: President Trump’s signing of a US $ 2.3 trillion pandemic aid and spending package, restoring unemployment benefits to millions of Americans and avoiding the closure of the federal government; and continued optimism about vaccine roll-out.

Towards the end of the week, some near-term optimism waned in the U.S. market after Senate Majority Leader Mitch McConnell blocked a quick vote in support of Trump’s call to increase checks $ 2,000 Covid-19 relief, compared to $ 600 already signed. .

The gains were made by: a US tax assistance program for coronaviruses; a decrease in crude oil inventories of 6.1 mbpd for the week ending December 25 compared to a smaller reduction in supply to 0.6 mbpd the week before, as reported by the EIA; and the news that Britain and the European Union had signed a post-Brexit trade deal, along with a drop in crude stocks, sparked optimism.

The euro appreciated 0.91% to 1.230 – hitting its highest level since April 2018, garnering support from the weak dollar, which helped offset concerns about the rising death toll of Covid-19 in the block.

Germany recorded its highest number of daily deaths on December 29 with 1,122 deaths. With the current lockdown measures set to expire on January 10, there was growing speculation that Chancellor Merkel would likely announce an extension of severe virus restrictions soon.

The pound hit its highest level since May 2018 after: the UK-EU trade deal was signed in Brussels and Westminster preparing to ratify it; and the UK government has approved emergency use of AstraZeneca and the University of Oxford’s Covid-19 vaccine, which will be administered from Monday.

Moreover, the latest summary of opinions from the Bank of Japan (BoJ) showed that policymakers were divided on how far to go to fine-tune its stimulus package, with some calling for an overhaul of its strategy to reach 2% inflation. .

The policy review will focus on adjusting the BoJ’s purchases of exchange-traded funds (ETFs) and yield curve control operations.

The majority of Asian currencies excluding Japan have strengthened against the dollar. The South Korean won appreciated 1.44% to 1,086, followed by the Indonesian rupiah, up 1.06% to 14,050. The Philippine peso was the outlier, sliding 0.06% at 48.05. Meanwhile, the ringgit closed higher at the end of the week, up 0.06% to 4.037 – hovering at a two-year high, on the rise in crude oil prices. On the data front: Exports were better than expected – up 4.3% yoy (yoy) in November vs. 0.2% yoy in October (consensus: 3.9% yoy) annual); imports contracted for the ninth consecutive month to -9% yoy against -6% yoy in October (consensus: -4.8% yoy); while the still weak producer price index in November contracted for the ninth month to -3% yoy from -3.6% yoy in October.

US Treasury Bill (UST) Market In the middle of a short work week and near the end of the year, the yield on the US Treasury flattened, with the front-end rising 0.2 at 0.5bp while the 30yr UST eased 0.5bp. Meanwhile, the closely watched UST10Y was depreciated at 0.923%. The flattening came after Trump enacted a US $ 2.3 trillion pandemic aid and spending law, which will restore unemployment benefits to millions of Americans and prevent a government shutdown federal. As of noon on Friday, the benchmark UST 2, 5, 10 and 30 year yields were 0.12%, 0.37%, 0.92% and 1.66%, respectively.

The local bond market was calm as volume was lukewarm ahead of the New Years holiday. Meanwhile, the Malaysian government announced a further extension of CMCO in some states and regions until January 14.

Secondary trade volume surged during the week, advancing 55% to RM 1.2 billion from RM 0.8 billion. The credit spread narrowed by 15.7 basis points on average across the curve.

During the week (December 24-30), the KLCI FBM edged up 3.24 pts or 0.20% to 1644.41 pts, underperforming the MSCI Emerging Markets Index and the Dow Jones Industrial Average which increased by + 2.83% and + 0.69% respectively. Prospects for a recovery were strengthened as a U.S. government shutdown was avoided after Trump signed the second stimulus package he had previously opposed.

Investor sentiment was also bolstered by the news that the EU and UK have reached a post-Brexit trade deal and the satisfactory progress of Covid-19 vaccination programs around the world.

Foreign investors became net buyers in the local market, nibbling RM 85.0 million in Malaysian stocks, but this was insignificant compared to the net outflow of RM 24.5 billion since the start of the year.

Local institutional and retail investors continued to dominate the market with a participation rate of 45.0% and 40.4% in December respectively (comparable to 45.2% and 38.4% in November).

As foreign investors remained passive, their participation rate remained low at 14.6% in December (against 16.4% in November).

Equity trading activity slowed slightly, with the average daily traded value (ADVT) moderating to RM 5.1 billion in December (from RM 5.2 billion in November), the turnover speed of business decreasing to 69.4% in December (against 74.0% in November).

During the week, 10 of 13 sectors of Bursa Malaysia finished in positive territory. The best performing sector was transport and logistics (+ 4.6%), driven by the optimism of the recovery.

The worst performing sector was healthcare (-1.8%), as investors continued to reduce their positions in gloves stocks, anticipating that the pandemic will be gradually brought under control with the availability of effective vaccines.

In the coming week, investors will be keeping a close eye on:

> Composite PMI of the Markit euro zone (December) on January 6; 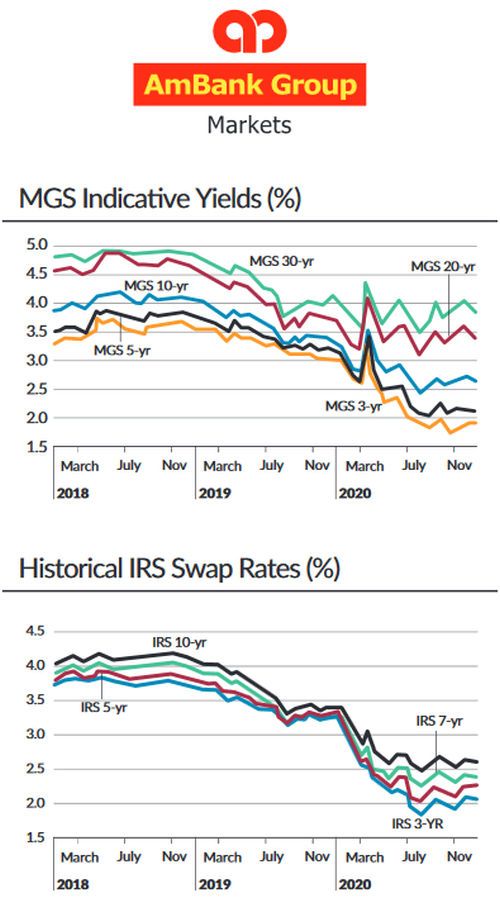 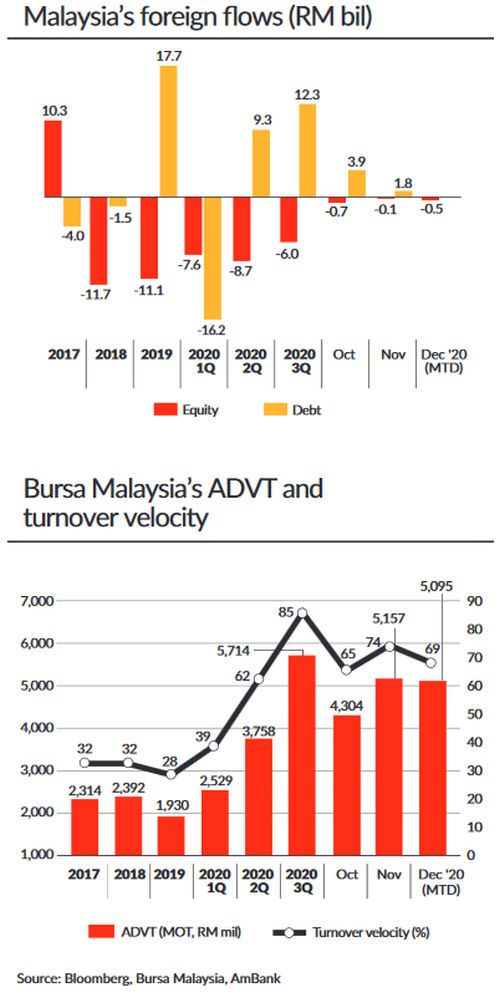