The pound sterling has fallen against the euro and the dollar, could vaccine rollout problems be responsible?

The British pound is on track for its second consecutive daily decline of more than half a percentage point against the euro, a series of losses not seen since December 2020, with a similar decline against the dollar.

If the pound fails to rally and contain losses on the Wednesday before the close of the day, the technical outlook is looking for a noticeable deterioration, which could indicate a trend reversal.

A suspected fundamental factor in the loss could be the looming loss of momentum in the UK vaccine rollout program, which in recent weeks has been attributed to Sterling’s stellar 2021. 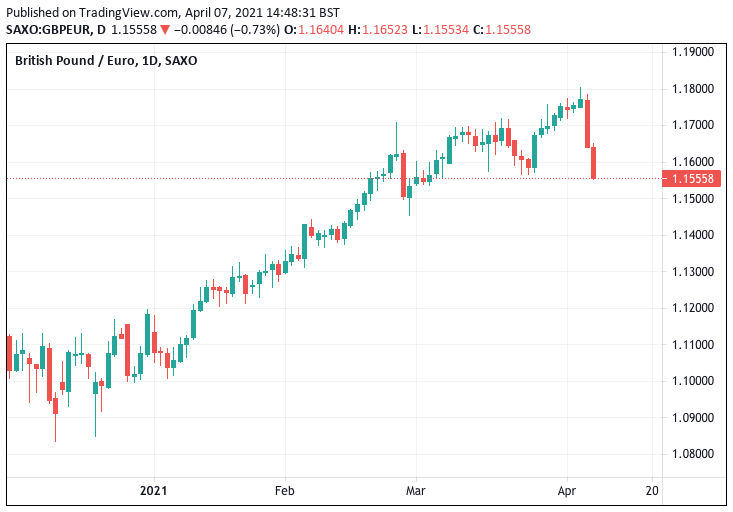 “This is worrying about the rapid recovery in GBP / USD of the 1.3800 key level last week. Let’s see if there is a support zone of 1.3740-70, ”says Eric Bregar, head of currency strategy at Exchange Bank of Canada… “The momentum is not very good.”

The UK medical regulator is expected to issue a temporary ban on the AstraZeneca vaccine for younger age groups on Wednesday, a significant blow to the country’s vaccine rollout.

The data leak suggests the vaccine should account for three-quarters of the UK’s projected supply, with some commentators suggesting that the country’s vaccination campaign could effectively end and delay government plans to unblock the country.

Expectations that the rapid vaccination program will lead to a sustained unblocking of the country’s economy prompted investors to appreciate the pound sterling, especially against the euro.

“It seems that the British pound has few positives left, especially when looking beyond the positive seasonal effect of April. Indeed, a slowdown in Covid vaccinations in the UK could ultimately delay government plans to revive the economy, despite recent statements by Prime Minister Johnson, says Valentin Marinov, an analyst Crédit Agricole…

The UK Medicines Regulatory Authority (MHRA) will issue a statement at 15:00 Moscow time following an investigation into the AstraZeneca vaccine regarding potential links to rare blood clots.

Both European and UK regulators have reviewed reports of rare cases of brain clots in people who have received the vaccine, and the EU regulator has EMA confirming on Wednesday that the vaccine should continue to be used.

In the UK, 30 people are reported to have had blood clots, seven of whom have died, out of an estimated 18 million who received the injection.

US oil production to contract more than previously predicted in 2021: EIA