The RBA kept its interest rate at 0.1% and announced that it would discuss whether or not to retail its 3-year bonds. And gold looks poised to break above 1800 as the bulls return to that milestone again. 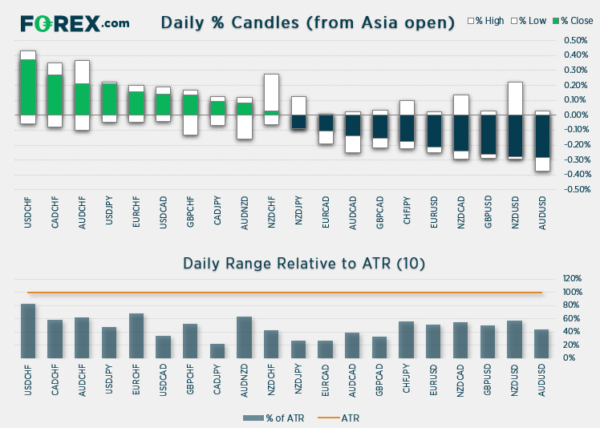 After a positive start following Wall Street, Asian stocks look mixed. The ASX 200 is the strongest of the major benchmarks, climbing 0.5%, followed by the Hang Seng at 0.25%. Shares in China and Japan were down, with the SEC and CSI300 down about -0.8%.

As for the FTSE 100, bulls continue to challenge (but cannot keep prices above) 7000. Not wanting to sound like a broken record, the fact that it is struggling with this milestone, failing to test the April high at 7019, makes this index difficult to rise. , and two bearish pinbars have formed at recent highs. In the last 8 sessions, it has failed to recoup the 2% loss it suffered two weeks ago, so it looks like we have a very slow grind top in our hands (which can’t seem to peak). But when such moves fail, they can do it so quickly, which is why we continue to monitor potential changes in the FTSE index. Perhaps a break below 6929 could finally trigger a bearish continuation. 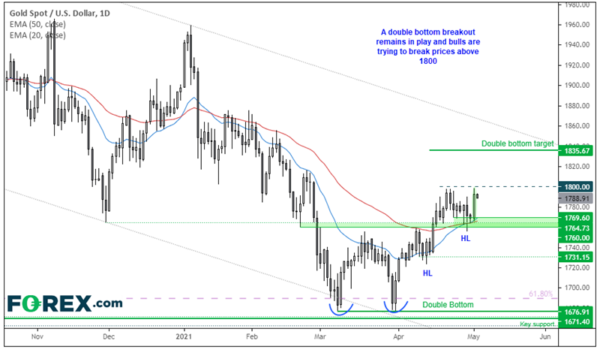 Gold appears to be looking to break above 1800 after rallying 1.3% yesterday and stalling at the cusp of this pivotal level. The 20-day and 50-day eMAs acted as a springboard for gold prices yesterday after last week’s bearish outside candlestick failed to hold below key support at 1760. The 1676 double bottom pattern remains in play and its target is circa 1835, daily trend structure suggests we may face a breakout sooner rather than later.

Copper futures formed a bullish engulfing candle yesterday, suggesting a swing low at 4.4350. During overnight trading, prices remain in the upper third of yesterday’s range, so we will be watching for a potential break above 4.5510 to suggest a continuation of the trend.

Oil prices remain supported after Iraq’s oil minister said he expects oil prices to remain above $ 65 and OPEC + production cuts should help keep prices at normal levels. Support was found between the 10-day and 20-day eMA for the WTI and yesterday it showed a bullish reversal with two bars.

The US Dollar Index (DXY) has recouped about half of yesterday’s losses incurred when the US PMI data was weaker than expected. However, while the report still contained some compelling numbers, traders were clearly in the mood for something better.

The US dollar is the strongest currency and has appreciated against all of its day-trading peers, adding 0.4% against the Swiss franc and about 0.22% against the British pound, Australian and New Zealand dollars.

The British pound remains strong after the UK announced a £ 1 billion trade deal with India. The GBP / JPY pair made a bullish reversal with two bars yesterday, found support at its 10-day eMA and showed the potential to retest the 152.55 high (and possibly even higher). EUR / GBP has formed a bearish engulfing candlestick, although the 50-day and 20-day eMAs are currently providing support. A break below them calls attention to the 0.8655 high.

Forward (once per BST) 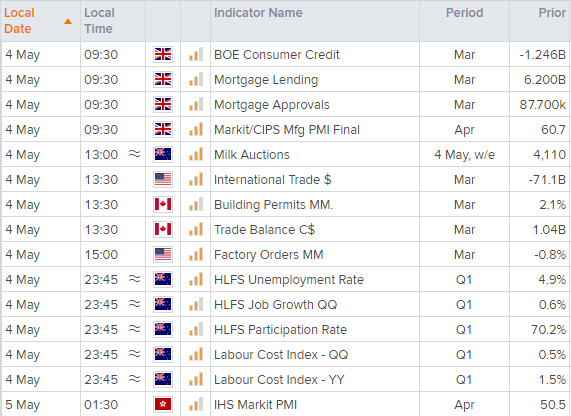