Looking at the Fed amid rising inflation

EUR / USD is trading at new monthly lows around 1.2100 and with increased bearish potential. Investors are reading past revised US inflation data, which hit 5% y / y in May, accelerating at the fastest pace since 2008. The US Federal Reserve will hold a monetary policy meeting next week, and an estimate of record inflation will be critical for the dollar. direction.

The volumes of foreign exchange transactions are the lowest for the year. After a peak in March 2020, when the pandemic hit global markets, the focus has been on economic return. A year later, optimism returned. There are signs of strong growth in developed countries, although the recovery is uneven. Low- and middle-income countries continue to be in poor shape. While COVID-19 vaccines have brought some relief, the pandemic is far from over. New strains, delays in immunization and even antiviral drugs pose a threat to him.

It also takes too long. According to initial WHO estimates, there are 18 months left until the end of the pandemic. At the moment, the world is in the process of transitioning to normal life, and the northern hemisphere is better formed to complete the process in the second half of the year.

General optimism tends to support demand for high yielding assets at the expense of the dollar. At the same time, the US appears to be one step ahead of its counterparts in returning to a sort of normalcy. This particular ban will only be violated by central banks. The first to cut financial support will be the one who appreciates their local currency.

Meanwhile, speculative interest continues to struggle over whether to buy the dollar on its own or sell it in favor of high yielding currencies.

The European Central Bank announced its latest monetary policy decision on Thursday and, as expected, policymakers left rates and aid programs unchanged. President Christine Lagarde has been extremely wary of the remaining risks and said extremely loose monetary policy will remain in place to avoid leaps in borrowing costs that could delay recovery. At the same time, the central bank has revised up its growth and inflation forecasts for this year and next.

On June 16, the US Federal Reserve will announce its decision on monetary policy. The US central bank is expected to maintain its current policy unchanged despite the sharp rise in consumer prices. Fed officials have said repeatedly that warming inflation is likely to be temporary amid renewed demand and supply chain delays. As usual, it takes more than a swallow to make summer. The Fed may be worried about inflation if it does not fall from the latest level in the coming months. However, negotiations on the narrowing will be postponed.

Germany’s data released over the past few days has been mixed, reflecting what has been said previously. Developed countries are on the road to recovery, but have not yet reached this level. Industrial production in the country fell 1% mom in April, and factory orders fell 0.2%, although the annual figures exceeded expectations. The ZEW survey showed that in June the economic sentiment index fell to 79.8, and the seasonally adjusted trade balance was 15.9 billion euros.

In the EU, the Sentix investor confidence index in June was 28.1, and the gross domestic product for the 1st quarter was revised upward to -0.3% q / q, which turned out to be better than expected. The US released the April trade balance of goods, the deficit of which amounted to $ 68.9 billion, better than expected. The number of initial claims for unemployment benefits for the week ended June 4 was 376 thousand, which is higher than the previous 428 thousand, but above expectations. On Friday, the country released a preliminary estimate of Michigan’s consumer sentiment index for June, which improved more than expected to 86.4.

In addition to the Fed, the macroeconomic calendar includes other important macroeconomic indicators such as the German consumer price index for May and US retail sales for May. The European Union is to publish data on inflation for May.

Last week, EUR / USD was confined to a narrow range, posting moderate losses and trading near a monthly low of around 1.2100, shifting risk downward. The weekly chart shows that technical indicators remain within positive levels, but have lost their positive momentum. Meanwhile, the pair continues to advance above all of its moving averages, with 20 SMA currently providing dynamic support at 1.2040.

On the daily chart, the pair is clearly bearish. The pair broke below its 20 SMA, accelerating its decline after several unsuccessful attempts to cross it. Technical indicators are steadily declining within negative levels, reflecting the increased interest of sellers.

Sellers have leveled off at the 1.2200 region, where the mentioned daily 20 SMA is located. A clear break below 1.2100 should open the door for testing the psychological 1.2000 threshold next week. A drop below the latter could be triggered by aggressive Fed action with the next possible bearish target at 1.1940. Above 1.2200, the pair has the next resistance at 1.2245, heading towards the 1.2300 price zone. 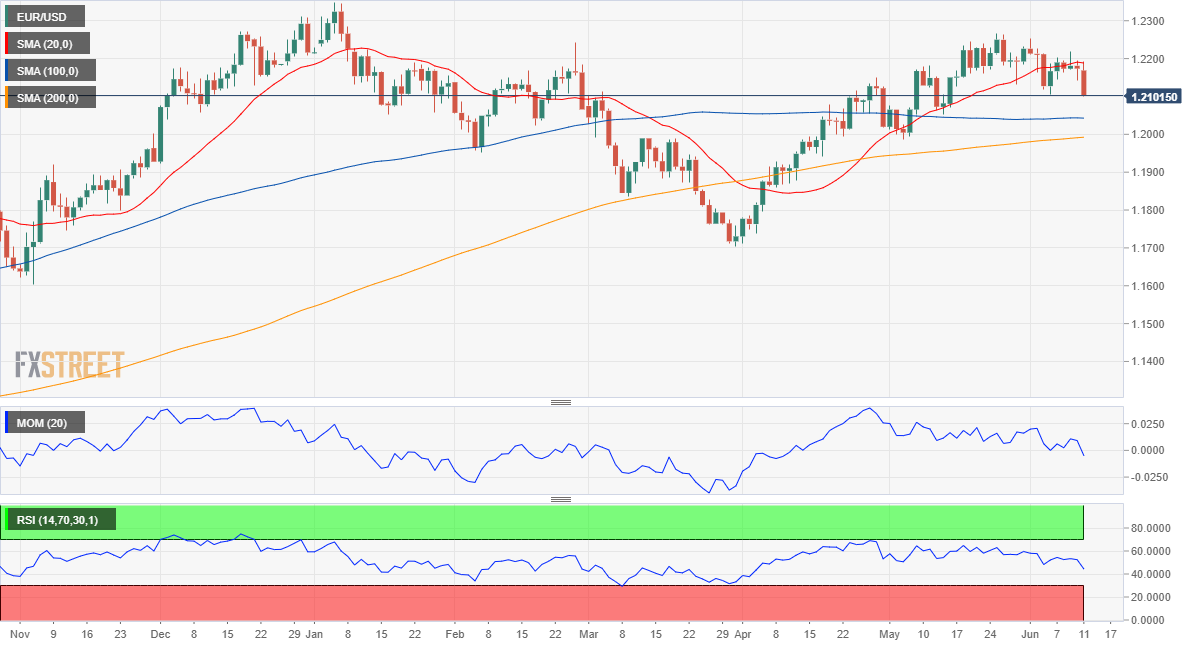 Bears have gained the upper hand over EUR / USD according to FXStreet Forecast Survey… On the three time frames studied, the pair is visible from below, although bearish interest is declining over time. The number of those who wait for the slide on a weekly basis is 64%, and in a quarterly context – 43%. It is worth noting that bulls are around 30% or less in all cases.

The overview chart shows that the moving averages are bearish neutral, and the number of possible targets below the current level increases slightly in the weekly and monthly overviews. In the long term, however, most of the targets are concentrated between 1.21 and 1.24, suggesting that sustained dollar gains are still unclear.

GBP / USD Weekly Forecast: Is It Time for Sterling to Shine? UK data, Fed could set fuel on fire

The Weekend reads: Everything You Need To Know About US Inflation.

The Weekend reads: Everything You Need To Know About US Inflation.