Russian aviation, the largest market in Europe, is headed by LLC “LCC Pobeda”

According to CAPA / OAG, Russia is the largest market in Europe in terms of airline seats in the week commencing June 7, 2021, up from seventh in the same week in 2019.

The UK, which was the largest market two years ago, is now in seventh place.

Moreover, the total passenger capacity to / from / to Russia is at 82% of the 2019 level. Among the 10 countries in Europe with the most seats this week (June 7, 2021), this is the highest percentage of pre-crisis capacity.

That percentage fell only marginally from 84% of the weekly seat count in 2019 in the previous week, which was still its peak during the coronavirus pandemic crisis. In terms of this indicator, throughout the entire crisis, Russia has consistently been significantly higher than the European average.

Russia has been at 50% or higher since mid-July 2020, while Europe as a whole has not climbed above 45% since the start of the crisis.

Russia has the largest domestic market in Europe

The Russian domestic market is the largest in Europe in terms of the number of seats in the week of June 7, 2001, more than double that of Turkey, which ranks second (the domestic market of Russia was also number one before the crisis, but only 44% more than Turkey in the equivalent week of 2019).

For all of 2019, the domestic Russian market accounted for 51% of seats, compared to an average of 24% across all European markets. This helped the Russian aviation market survive the crisis.

Russia’s domestic market has suffered less since the start of the pandemic, falling to a low of 40% from 2019 levels in May 2020, while its international market fell to just 5% in June 2020. 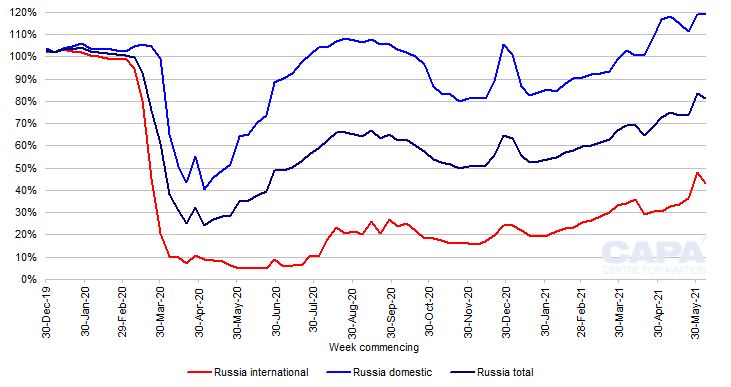 Domestic transportation is the most dynamically developing domestic market in the world.

On the domestic market, Russia is strong not only in terms of throughput, but also in terms of passenger traffic.

IATA data show that in Russia in April-2021 (the last month for which data are available), the growth of the internal RPK was 11.0% compared to 2019, while the internal load factor decreased by only 1.0 percentage points. , up to 79.9%. 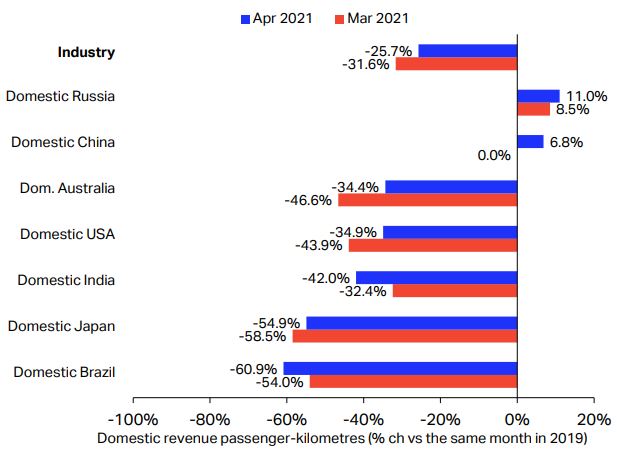 Its domestic market has increased the total passenger traffic in Russia in comparison with the figures for Europe.

Russian airlines carried 69.2 million passengers in 2020, or 54% of the 2019 figures (source: Federal Air Transport Agency). This compares favorably with the global passenger traffic of only 39% of the 2019 level (source: IATA).

According to the Federal Air Transport Agency, in April 2021, Russian airlines carried 7.2 million passengers, of which 6.2 million (86%) were domestic passengers.

Passenger data for Europe as a whole for April 2021 is not yet available, but preliminary data from ACI Europe point to a level of about 20% from 2019 figures for the month. 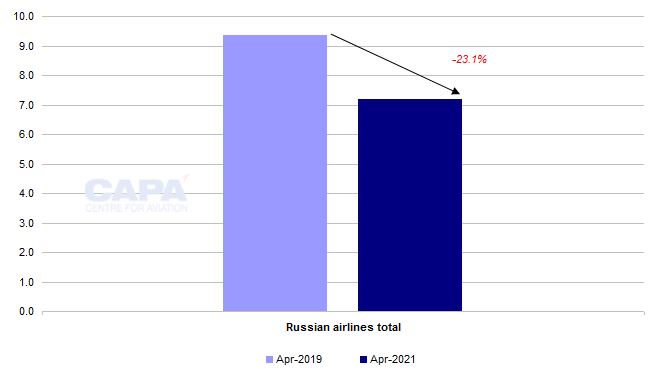 Aeroflot, the country’s largest airline, lost 55.1% of passengers to 1.37 million in April 2021, according to Rosaviatsia. 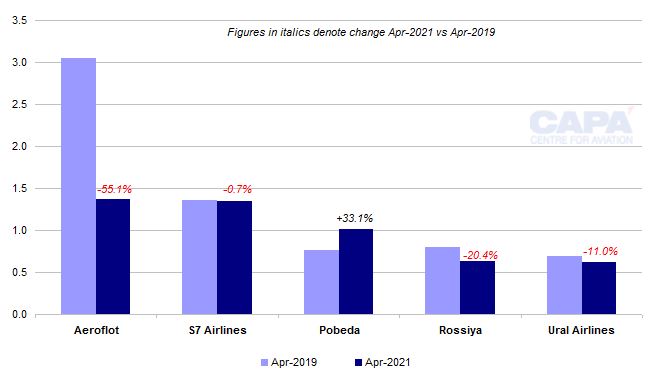 Victory quickly recovered from the COVID-19 crisis after the absence of passengers in April 2020 and May 2020, returning to year-over-year passenger growth by July 2020 (when traffic increased 1.6% compared to July 2019). …

Pobeda then achieved double-digit passenger growth from August 2020 to October 2020 and broadly stable performance in November 2020 and December 2020. LCC has been profitable in 2020.

In May 2021, Pobeda added Moscow Sheremetyevo, the main hub of parent Aeroflot, to its Moscow network centered at Vnukovo. The company is confident that it will be able to achieve a 25-minute turnaround time at Sheremetyevo and is working in partnership with Aeroflot through code-sharing.

Pobeda has a decisive advantage as it is the only LCC in Russia, and it seems that there is currently nothing, not even a global pandemic, to stop its growth. Others are considering launching an LCC in Russia, but Pobeda has a significant head start and relies on the resources of the Aeroflot group.

If Pobeda can successfully adapt its business model from a purely point-to-point operator to a connection to Aeroflot, growth (and profitability) looks set to continue.

Gold Falls Amid Dollar Strengthening Due To “Transitional” Inflation

Gold Falls Amid Dollar Strengthening Due To "Transitional" Inflation